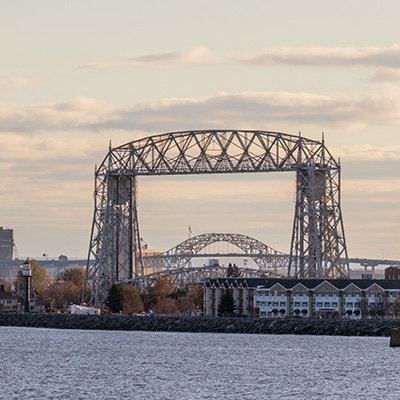 Since 2013, Wisconsin Ports has been working with the Center for Freight Infrastructure Research & Education (CFIRE) and several state agencies on a multifaceted strategic plan for the development of Wisconsin’s on both the Great Lakes and Inland River system to more fully utilize and develop Wisconsin’s port facilities. The development effort will support sustainable market attraction and growth at the ports as well as economic and community development that contributes to the overall wellbeing and quality of life in the state of Wisconsin.

Wisconsin’s marine freight capabilities, with access to two Great Lakes and the Mississippi River system, offers a cost effective and environmentally friendly solution for the growing waves of freight that are predicted. Phase I of the multi-agency Wisconsin Ports Development initiative began in October 2013 with the goal to support increased freight movement and logistics development at the state’s commercial ports. As an outcome of increased freight movement at the ports and communities, the state anticipates increased employment, increased economic development, increased logistics focus on Wisconsin ports and a greater sense of port community.

Phase I of the planning process was completed in 2016 with the development of the Wisconsin Commercial Ports Development Initiative Final Report (WCPDI). Several other supporting reports were also completed as part of this process including a benchmarking study and an inventory of the resources of the Mississippi River ports separate from the Great Lakes ports.

After the initial development of a strategic plan, infrastructure and market inventory and planning review in Phase I, WCPDI Phase II was initiated as, Leveraging our Comparative Advantage, Phase II: Identification and Development of Wisconsin Port Market Scenarios. The purpose and objectives of “Identification and Development of Wisconsin Port Market Scenarios” are to identify the commodities, project cargo, corridors and new markets with the greatest potential for maritime movement that are not currently serviced by a maritime route, and then evaluate the routing, feasibility, costs, time and consequences of current land-side routes and a comparable marine delivery.

For Phase II, the project team identified market sheds within the reach of Wisconsin by water, evaluated the availability and movement of commodities, containerized cargoes and OSOW cargoes, and then identified four marine highway corridors that connected Wisconsin to its trading partners. The corridors align with the existing MARAD marine highways of M-55 and M-35 corridors as well as with several variants of the M-90 corridor. For each of the highway and marine highway corridor sets, comparisons between the routes were based on distance, transit time, travel cost for one FEU, fuel use and emissions. These factors were then used to determine the cost of equivalent moves across the modes as the capacity in one trip is greater on a barge or freighter than that of a single truck move. This feasibility analysis demonstrated that the marine corridors were, in fact, cost competitive and generated substantial environmental benefits over the truck moves.

Also, for each corridor pair, a modal diversion analysis was conducted to provide commercial port stakeholders a baseline estimate to the volumes of freight leaving their respective regions within the state, as well as volumes of freight that could potentially utilize the marine highways instead of traditional highways. To support the use of the information to develop these marine highway corridors, a list of commodities and shipping businesses in proximity to each of the commercial ports is provided. This information can be used to identify potential cargoes and customers.

Importantly, a multi-agency team has continued to support the WCPDI process. A diverse group of agencies including WEDC, WisDOT, DOA-Coastal Management, WDNR, as well as Brown County, the Port of Green Bay and Port Milwaukee have worked with CFIRE at UW-Madison to generate the momentum and actions to move Wisconsin’s commercial ports ahead. There is certainly more work to do, and while the dynamics of the economy will continue to change and bring additional challenges to all modes of shipping, it is important to develop and support the marine freight system to provide for economic development, provide resiliency to shipping in the state and to minimize the environmental impacts of moving freight.

An infrastructure and market assessment of the Ports of La Crosse and Prairie du Chien.

The master plan to increase economic development at Wisconsin ports.